Welcome Blog About Me Services Book Shop Information Contact Me

WHAT HAPPENS WHEN LONDON BOOK FAIR IS CANCELLED?

The cancellation of London Book Fair certainly created problems for many in the world of books. Including me. But I was not going to be thwarted especially as my main reason for attending LBF was to meet up with Australian Publisher Kate Stead from Old Mate Media. We’d been planning our get together since October last year so I was prepared to go ahead if Kate was. Mind you Kate didn’t have much choice as she only discovered the cancellation as she sat in the plane on the runaway ready to take-off. Can you image the rumpus she would have caused had she suddenly jumped up shouting, “Stop! I want to get off? I can’t go because of the Coronavirus.”  Too late Kate.

And so, with my bags packed, hotel booked, first class train tickets, (a girl has to spoil herself occasionally), and my husband’s warnings ringing in my ears about the dangers of being in the capital I left Cardiff Bay. I was away on an adventure. To be honest at my age any trip is exciting. But I was looking forward to finally meeting Kate in person. And, I was not disappointed as we hit it off like two bush fires coming together! Oops! Perhaps I shouldn’t have said that but you know what I mean.

Our first meeting was great as we spent the evening at The Self-Publishing Show Evening event – The Dixie Queen Drinks Party. Unfortunately, I had been unable to attend the afternoon’s presentation which I was reliably informed was great. Apparently some 600 out of 800 of the people registered were in attendance. The evening event was also well attended. We were welcomed with champagne and entertained with some brilliant Jazz music as we slowly sailed up and down the Thames. It was a great evening spent in the company of like-minded people; i.e. authors and the such like. With the evening over it was time to get down to business. 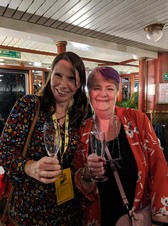 The one thing you have to remember about the Capital is that it’s big and it’s busy. If you are like me and find walking around a little difficult then you have to rely on alternate modes of transport. Having bad knees, I shunned the rush of the underground; too many stairs and long walks to the platforms, opting to use Uber cars instead of taxis. Yes, an expense but certainly cheaper than the normal London Taxis. As it worked out, I only had one minor problem and that was due to the car not being able to stop where I wanted picking up. Something to do with red lines on the roads?

Anyway, Tuesday morning saw me meeting up with Kate and my local publisher whom I work with in Cardiff. The aim was to try and facilitate a UK/Australian liaison or working relationship for the benefit of both partners and thus each other’s respective authors. Watch this space for further details as the link develops. Kate and I followed the meeting with a tasty lunch at Romulo’s Restaurant where the dessert matched the bright purple streak currently running through my hair.

Back to the hotel to relax and catch up on my judging of the first set of stories for the BBC Radio 2’s 500 Words Competition. Tomorrow was to be another busy day with a planned workshop in the morning and our Children Author’s Get Together in the late afternoon. Who knew what would happen? Still the trip so far had gone to plan.

It was another early start with enough time for a quick bite to eat. Grabbing a banana, I left just as my Uber car arrived on time ready to take me to Waterloo where Kate had planned her workshop meeting. Sadly, only two ladies appeared that morning, yet we managed to discuss the workings of cover design, comparing the obvious differences between Indie and Traditional publishing.

An American lady (whose name I sadly fail to recall) explained to us the intricacies of living and running a business in Sweden. She also explained how she had moved twenty times in eighteen months due to her husband’s career choice. Hey, you go where the work is when necessary. Not everyone can sit at home and do their job like we writers can.

The other young lady Silvania was French although she had moved to the UK many years ago. She had originally settled in Yorkshire (nice place) but now lived in London. Her books are written in French and published in France only and it was she who was trying to redesign her book cover in order to make them look a little more interesting. I will say she had certainly done her homework, something I keep telling the writers I mentor. Research, research, research is the only way to go not matter what you are writing or creating. She finally decided to go back to the drawing board but still went away pleased with our joint input.

The afternoon saw Kate and I meeting at The Queens Head in Hammersmith ready for our Children Author’s Get Together. We were joined by David Norrington from 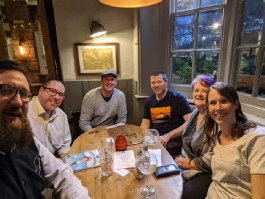 Wordcatcher Publishing who shared his expertise and advice willingly. Although the numbers who attended was low, we still had a positive event. The evening ended with Fish and Chips, plus a Gin and Tonic for yours truly making it the perfect ending to another constructive and enjoyable day.

Making my goodbyes to Kate, who was off to Dublin in the morning to catch up her brother, I returned to the hotel for a good night’s sleep. Oh yes! And possibly a lie-in?

Having had a few hectic days prior to London and then crossing the Capital back and forth with early morning calls I chose to be lazy the following morning. However, with the sun shining and lady wanting to clean the room I felt it was time to get a move on. Once dressed I was away to the British Library to do a little research. Fortunately, I had pre-registered for a Readers Card and upgraded my account prior to leaving Cardiff. It wasn’t that busy but had it been I could have seen myself wasting some time queuing to register on-site. You do need a reader’s card if you want to access certain areas.

My aim was to try and research the main character of my next historical novel; one which has been in the making for about six years now. Sadly, there wasn’t much available so I chose to review copies of my Great, Great Grandfathers Newspaper – The Sowerby Bridge Chronicle. When I first learnt about this newspaper, I wasn’t aware that he had both produced and printed it for about thirty years. Maybe that is where I get my writing ‘bent’ from?

The one thing I did discover is that it takes a lot of work to gain access to and download copies from a microfiche. Even longer to take copies of the actual print copies. That is if you are lucky enough to be given access to them. In most cases the paper they are printed on is now so fragile they often won’t even open the files they are kept in.

Luckily, I gave someone permission to access the files a couple of years ago and he got copies of about nine years’ worth. So far there are only six years on microfiche with another twelve in their original state. To see these, I would have to go back to Yorkshire to the BL Hub and request them. There are also a couple of years missing from the records. Still the experience was great and has certainly left me wanting to return to the BL again to discover more of the place. I did manage to download about five months of the newspaper. But as he produced only one per week that isn’t that many.

A quick return to the hotel to get changed and I was off out for a new culinary experience as I was having dinner with my step-daughter who lives in London and has now become a Vegan. I have to say I was pleasantly surprised and enjoyed both the food and company. Back to Cardiff tomorrow where I will throw myself into catching up on all my emails and do some more judging of the BBC Radio 2 ‘500 Words’ entries. I also have to clear my schedule as the ‘Page Turners Award Competition’ is now open and as I am offering a Mentoring Prize I need to be prepared.

The one thing this week has shown me is how much I enjoy doing what I do. The writing, meeting people and mentoring other writers has given me a great deal of pleasure over the last ten years. Add to that the new and wonderful things that are in the pipeline and I am hopeful of seeing some successful events and achievements during the forthcoming two years. Watch this space!