YOU ARE AN ARTIST

Photo by bruce mars on Pexels.com

You have a story that is worth telling. But maybe your writing hasn’t caught up yet to the inspired idea

you’ve been working out in your mind as you sit and recover from your day job.

What you must remember is that writing is a process.

At the moment, you are probably still at the drafting out stage. Drafts, particularly first drafts, aren’t

perfect. They are messy. Often riddled with grammatical errors and sentences which appear to be in a language of your choosing but which sounds foreign. You question if this is exactly where your writing is supposed to be?

Well yes! When you start to write it is usually in clichés and flat lines of dialogue. Mainly, because you are only in the beginning stages of unveiling what your story is all about. You haven’t reached its true potential as that is still some way down the road. What you need to do is think of yourself as an artist, sketching out the shapes of a landscape. Adding detail and colour will come later, with patience.

However, you will experience failure. Often due to self-doubt which occurs during the drafting stage. As you read your first draft you will consider that the inconsistencies and poorly structured sentences deem you unfit to continue writing. Making you feel a disgrace to the art of composition. But, remember the artist. Just because he sketched a shoe instead of a foot doesn’t mean he can’t draw toes. No. He is waiting for the right moment. And it is the same for a writer. One has to accept that one is imperfect to be a writer. Like an artist accepts that the first line he draws won’t be the straightest.”

Ask any author to review their first draft and they will all confess to being embarrassed. It could be having a number of identical characters, or a main character who doesn’t know what he/she wants? The author probably didn’t know either at the time. But that first draft, however horrible it was, serves them as a reminder that having the draft of a novel, is a lot better than having an idea for a novel. You can revise a draft, but you can’t revise an idea. After all, an idea is just hot air and not where the draft physically exists.

You must be willing to be imperfect to be a writer. As an artist, accepts that the first line he draws won’t be your straightest. Luckily, however, there are tools to help you reshape your work, but that will come later.

You’re a writer and an artist even though your novel is not finished.

What will separate you from others is that, while they have ideas for stories, they have failed to do what you do every day? You write.

Writing is not a competition. It is an art which should be practiced. You should have one goal, and that is to complete what you haven’t had the courage or time to do in the past. Remember, you don’t need to outdo someone else, or make your partners, friends, and family members proud. They can cheer you on, but don’t let yourself believe that when your word count slips you are letting them down in any way.

If you can write for a minimum of 20 minutes a day, you are doing great. Of course, anything longer is a bonus, so revel in the journey of discovery. 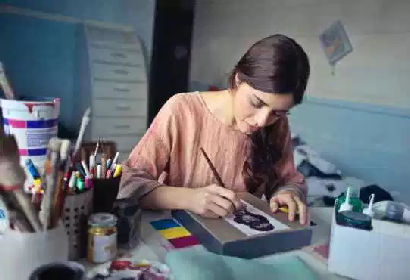